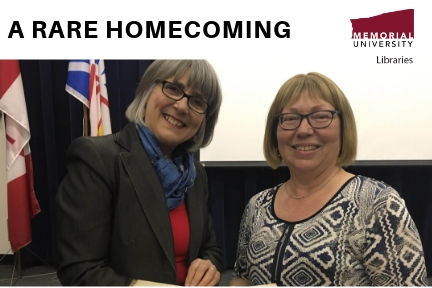 Research can often feel as if it has a certain serendipitous quality.

Author and Memorial alumna Marie Wadden was reading an article one day in The Evening Telegram by Dr. Hans Rollmann, a professor in the Department of Religious Studies at Memorial.

The article, “Wordsworth’s Nephew,” explored the life of Rev. George Hutchinson, who took up an Anglican mission post in Battle Harbour, Labrador, in 1853. The clergyman was the nephew of the acclaimed 19th-century Romantic poet, William Wordsworth.

However, it was not Rev. Hutchinson’s esteemed literary lineage that caught Ms. Wadden’s attention. It was the mention of the reverend’s only child, Lady Julia Horwood, that piqued her curiosity.

Ms. Wadden recognized a personal connection between her family and the woman.

One discovery leads to another

“Lady Julia Horwood had been a friend of my grandmother’s. She died in 1959 when I was four years old,” explained Ms. Wadden.

“She left her house and furniture to my grandmother, who had been her housekeeper . . So, Lady Julia Horwood was always a figure from my childhood that interested me. I know she was considered to be a very kind person and to have helped my grandmother a great deal.”

While lacking the charisma and notoriety of other historic characters such as Sir Wilfred Grenfell, Ms. Wadden found Rev. Hutchinson to be interesting in his own right.

She became interested in discovering more about the 14 years he spent in Labrador.

“It’s a really good social history of a young man growing up in one of England’s most famous family’s and then coming to N.L.”— Marie Wadden

While in England, she visited Dove Cottage and the Wordsworth Museum in the Lake District village of Grasmere. While there she discovered letters Rev. Hutchinson had written to his family from Battle Harbour.

She also tracked down all the letters that members of the Wordsworth and Hutchinson families wrote about Rev. Hutchinson’s life in England before he left for his post in Labrador.

When compiled, the letters tell a fulsome story that Ms. Wadden is documenting in a book she says is about halfway complete.

“I have been basically able to put together his life from cradle to grave, so it’s a really good social history of a young man growing up in one of England’s most famous family’s and then coming to Newfoundland and Labrador and adapting to that way of life and actually loving it.”

Then came another serendipitous discovery. While Ms. Wadden was researching Rev. Hutchinson, she came across an ad for a rare book.

The book was a 176-year-old Book of Common Prayer that Ms. Wadden is certain once belonged to Rev. Hutchinson.

She was certain because that very prayer book was proudly displayed on the mantle in Rev. Hutchinson’s tiny Battle Harbour mission house. In fact, it was spotted there in 1859 by another visiting Anglican priest, Rev. Louis Noble. Rev. Hutchinson acted as a tour guide to Rev. Noble and landscape painter, Frederic Church, when they visited Battle Harbour.

The book was inscribed by William and Mary Wordsworth and given to the then 25-year-old Rev. Hutchinson, who was preparing for a job at the Cathedral of Carlisle (a job he never got).

The inscription the Wordsworths wrote suggests that while their young nephew had no ear for music, he was making a great effort to overcome his handicap.

The book that was long thought lost had resurfaced at just the right time.

Ms. Wadden then got in touch with the Centre for Newfoundland Studies (CNS).

She felt the book was important to the history of the province and didn’t want it to fall back into obscurity. She contacted Colleen Field, acting head of the CNS, to see if it might be something the centre might consider purchasing.

A homecoming of sorts

Since its creation in 1964, the CNS collects and preserves published material relating to Newfoundland and Labrador. In fact, it holds the largest collection of published materials about the province in the world.

“This particular prayer book was an unusual purchase, as its content has nothing to do with the province,” said Ms. Field. “But I based my decision on its important connection to Battle Harbour and the Rev. George Hutchinson.”

And so the book began another trans-Atlantic journey some 166 years after its first trip to Newfoundland and Labrador.

For Ms. Wadden, having the book return to the province and find a permanent home in the CNS means that scholars and researchers will now have access to a tangible artifact that represents a fascinating life lived.

“It’s like a touchstone,” she said. “Here is something that I know that man handled.”

The purchase was made possible because of a generous fund left to the CNS by the late Dr. Sam Revusky, a former professor in the Department of Psychology at Memorial.

And so the loose ends of the story twist firmly to a close.

One researcher inspired another researcher by writing on a subject of which very little was known. Another researcher generously bequeathed an endowment to Memorial, making it possible for the timely purchase of a rare book.

It is possible this is just the beginning of a larger story without an end.

“This book is now part of the Centre for Newfoundland Studies’ ‘Forever Collection,’” said Ms. Field. “Researchers can drop by and have a look.”