A recent donation to Memorial University Libraries honours a lasting connection with the university.

The monetary donation from the estate of Dr. Samuel Revusky comes with a unique and creative stipulation — a thoughtful testament to a friendship between two colleagues and their shared love of books.

Dr. Revusky and Dr. Graham Skanes worked together in Memorial’s Department of Psychology in the 1970s and ’80s, where they formed a lasting bond of mutual respect and admiration, albeit sometimes hard-won, according to Dr. Skanes.

Just recently, Dr. Skanes found a letter that Dr. Revusky wrote to him when the former was department head in 1974.

Apparently, Dr. Revusky didn’t think that his colleague was living up to his department head responsibilities and wasn’t shy about letting him know it.

“What a letter it was … a diatribe,” said Dr. Skanes. “You could not imagine a worse letter for a young new department head to get, but anyway, we weathered that. He had integrity and his integrity and yours might collide, and they often did. But he was a very principled person and, if he saw something that he considered unprincipled, he would react to it.”

In retirement, Dr. Skanes became an antiquarian book dealer with a strong interest in preserving Newfoundland and Labrador’s historical record.

Over the years, Dr. Skanes and Dr. Revusky would exchange books, make recommendations and talk about what they were reading.

The Centre for Newfoundland Studies’ (CNS) mandate is to collect published materials relating to Newfoundland and Labrador.

Dr. Revusky’s directions about his donation were very specific.

“It was like having Christmas over an extended period of time.”— Dr. Graham Skanes

The money was to be used to purchase materials available on the scarce- and rare-books market and, most importantly, the materials were to be hand-selected by his good friend Dr. Skanes, in collaboration with the Centre for Newfoundland Studies in the Queen Elizabeth II Library.

“I don’t think we’ve had a donation quite like this before,” said Colleen Field, head, Centre for Newfoundland Studies. “It’s a different way of collection development that’s truly collaborative. Graham’s many years as a book collector and bookseller meant he had a keen eye for identifying titles new to us, especially those that may have a small section or just one chapter dealing with the province. Also, having this fund at my disposal meant that we could purchase rare materials as soon as they came on the market.”

His widow, Dr. Bow Tong Lett Revusky, arranged his bequest and has been an integral part of the selection of materials.

“He was in mind through the whole process and Bow, as well,” said Dr. Skanes. “It was really a pleasure to work on it. It was like having Christmas over an extended period of time.”

The fund allowed for the purchase of 17 diverse items that include books, government reports, a map, a photo album and a manuscript.

It is an 1828 children’s book about shipwrecked sailors who land in Newfoundland. The coloured illustrations in the book are exceptional.

The oldest item purchased is from 1630 and is an indenture that records the sale of a property and land to Anne and John Guy, the wife and son of the Bristol merchant adventurer, John Guy.

“It is dated Dec. 10, 1630, and is written on vellum with a fragment of a red wax seal still attached,” said Ms. Field. “Its age, appearance and link to John Guy made it just too hard to pass up.” 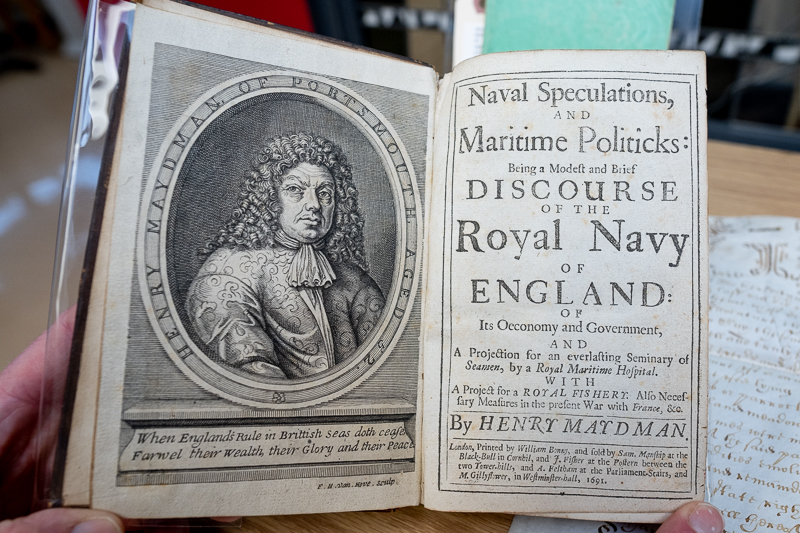 (One of the antique books purchased with Dr. Samuel Revusky’s donation)

Dr. Revusky found a clever way to honour the gift of a friendship that took root at Memorial University, a place of importance to him personally and professionally.

The impact of this friendship will be felt by researchers for generations to come, as they will have access to unique world-class collections in the Centre for Newfoundland Studies.

“I often think about why he didn’t just give me the money and I think he didn’t want to insult me by giving me money, so he decided he would support something I was doing,” said Dr. Skanes. “I was very humbled by it. I thought a lot of Sam, and to think that he thought that much of me is something.”