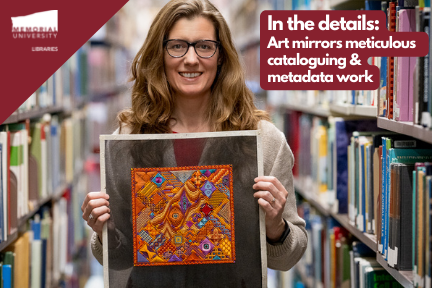 An embroidery exhibit currently on display at the University of Massachusetts features Memorial’s very own cataloguing librarian Heather Pretty. Titled Unseen Labour, the exhibit showcases the needle work of cataloguing and metadata librarians from around the world.

When they do their job well, no one notices the work they do, says Ms. Pretty.

“You can have a library with millions of books, but without the work of the cataloguing and metadata division you would not be able to find them.”

Guided by national standards, best practices, policies and guidelines, these librarians provide, among other things, the descriptive access or “aboutness” which makes library resources discoverable to library patrons.

“The work that cataloguers do isn’t often seen as creative,” said Ms. Pretty. “It is just seen as following standards. But nothing ever fits neatly into a standard, so there is actually a huge amount of creativity in our day-to-day work … when you look at a catalogue record, there’s a person in there, there’s the touch of a human in there, and it’s very individual.”

Exhibitors were asked to create a cross-stitch or embroidery piece that shares a story or an emotional experience about the unseen labour of their library work.

Like cataloguing, embroidery and other fibre art reveals only the finished piece, not the work of the stitching to produce it.

MARC records, around since the 1970s, took libraries from card to online catalogues, but they do not integrate well with the semantic web.

Ms. Pretty is part of a group of cataloguing and metadata librarians who are working to transition MARC records to a linked data format so they can integrate with the web.

When it is complete, the result of this transition will be transformative for the library world.

“It is a very exciting and messy time right now,” said Ms. Pretty.

Despite this chaotic transition that she draws her inspiration from, the expression of her needlework is anything but.

The intricate design she creates in cotton, silk and metallic threads mirrors the meticulous devotion to precision that she exercises every day in her job as a cataloguing librarian.

“The real connection between stitching and cataloguing is in the attention to detail,” explained Ms. Pretty. “I went into librarianship and then I found my way into the cataloguing and metadata division here at Memorial University Libraries, and I thought, oh my gosh, this is where I belong. When I joined the St. John’s Guild of Embroiderers, it was the same type of thing.”

Unseen Labour is curated by Ann Kardos, a metadata librarian from the University of Massachusetts.

Ms. Kardos took up cross-stitching in the early months of the pandemic to calm her racing mind.

“I had begun to feel pretty disconnected from, well, everyone,” said Ms. Kardos. “I was hoping that this project would be a good way to reconnect with people who do the same kind of work that I do. In my personal life, I’m a member of an online craft community started by Badass Cross Stitch, and I envisioned creating something similar for metadata librarians and cataloguers, to create a casual space to talk about work and our professional development goals.”

Now with roughly 60 members from around the world, the Unseen Labour project has grown into an active online community.

The group keeps in contact through an email list and Instagram, and several members have also created a Zoom stitching group that is now affectionately known as The Library Guild.

Unseen Labour: An International Library Community-organizing Embroidery Project and Exhibit about Metadata, Our Stories and Our Service is on display this semester at the University of Massachusetts Amherst in the Science and Engineering Library until May 6, 2022.