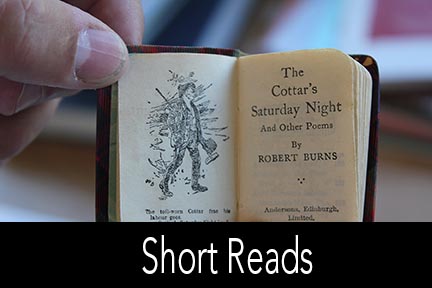 The exhibit includes a series of miniatures from Memorial University Libraries’ Archives and Special Collections division.

Once mechanical paper-making became the norm early in the 19th century, paper sheets were cut off a continuous roll so the concept of format became obsolete.

Miniatures generally do not exceed three inches in height and can be read without the aid of magnification. The miniature books on display include a later edition of the smallest complete Bible in the world, first published in 1896. The display also houses a one-inch Qur’an; this tiny devotional work was distributed to Muslim Ottoman soldiers fighting for the allies during the First World War.

"Miniature books are known as far back as the third and forth centuries,” said Pat Warner, exhibit curator and special collections librarian, Queen Elizabeth II Library. “Miniature devotional texts were known in the Middle Ages. Thumb Bibles were popular in the hand-press period. During the 19th century, novelty publications in miniature format became a publishing phenomenon. Leading the trend were the Glasgow publishers, David Bryce & Son. In some cases, miniature books were made so that really fancy doll houses could have their own little library.”

The mini-exhibition of book history is on display until Oct. 15 on the second floor of the QEII Library.