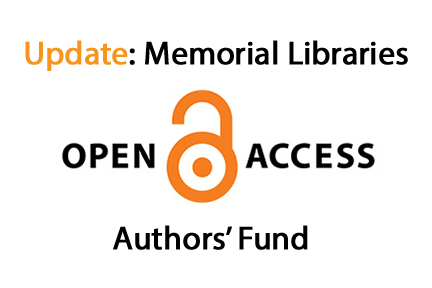 Due to the tremendous success of the Memorial University Libraries Open Access Authors' Fund, the funds allocated for the 2015/2016 fiscal year are fully committed.

The majority of the supported articles this year, as in other years, were published with BioMed Central and Public Library of Science using funds for article processing charges mitigated by our institutional memberships. As of August 1, 2015, no new article processing fees will be covered by the MUN Libraries OA fund except for those outlined below.

OA publishing support will be available via our memberships in PeerJ, Hindawi, Sage Open and the Royal Society of Chemistry as of August 2015. Articles currently in the queue for BioMed Central and Public Library of Science will be covered, but neither BMC nor PLOS will be able to charge the MUN Libraries OA fund for articles submitted between August 1, 2015 and March 1, 2016.

Articles submitted to other OA publishers and already approved by Erin Alcock, Dianne Taylor-Harding or Lisa Goddard will be funded.